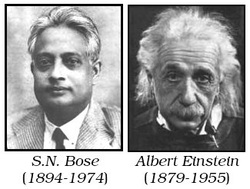 The idea of condensation in an atomic gas was first introduced in the 1920’s by Satyendra Nath Bose and Albert Einstein.  Bose had just developed a new approach to counting photons (Bose statistics), and sent his paper on the subject to Einstein.  Realizing that Bose’s ideas could also be applied to other integer-spin systems, Einstein considered a gas of bosonic atoms.  He found a critical temperature below which the energy of the system was minimized if a finite fraction of the atomic population entered the lowest energy state.

The resultant ‘condensate’ has been described as a new state of matter, with exciting new properties.  BEC can be thought of as the matter analog to the laser, in that the constituent particles are identical and highly ordered.  BEC is a macroscopic quantum phenomenon where an entire population of atoms act like waves instead of particles.  Condensation occurs when the atomic de Broglie wavelenght, defined as

The critical temperature for condensation depends on the density of the atomic cloud, which varies from one experiment to another.  It is often more convenient to discuss the phase space density of a sample, which is defined as the number of particles contained in a cube of the de Broglie wavelength.  In any experiment, condensation occurs when the phase space density is greater than 2.612.  This condition is achieved by lowering the temperature of the cloud while simultaneously increasing its spatial density.

While Bose and Einstein laid most of the theoretical groundwork for BEC by about 1924, the first condensates were not observed until 1995.  There are many technical hurdles to be crossed in the effort to produce a condensate, and experimental physicists had to develop new ways to cool and confine a sample of atoms before observtion of BEC became feasible.  A nice tutorial on the development of BEC can be found on the JILA BEC page.